80% of contamination enters critical environments via feet or wheels

Only 27% of contamination is prevented by peel-off mats

215,000 particles released every time a tacky mat is peeled

Contamination is a major and growing concern in cleanrooms, critical areas and controlled environments, from facilities for pharmaceutical, automotive and semiconductor manufacturing to food processing units and data storage centres. Although contamination from foot, wheel and airborne particles is often dismissed as simply ‘dust’ or ‘dirt’, the dangers it poses can be devastating. Contamination in a critical environment can have a major impact on quality, product yield, effectiveness and profitability.

The visible and invisible enemy
Particulate contaminants in critical areas are known to adversely affect quality, product yield, operational effectiveness and profitability. Particles can be viable or non-viable, made from different materials, come from different places and travel large distances.

There are two main types of particle contamination:

In some cases implementing measures to reduce the risk of contamination in critical environments, such as pharmaceutical facilities and food manufacturing plants, is a statutory requirement. Additionally, regulatory bodies such as the FDA and professional auditing teams using risk management systems, all recognise the importance of controlling contamination at floor level.

Installing Dycem Contamination Control mats or flooring prior to all entrances to critical areas will prevent up to 99.9% of foot and wheel-borne contaminants from entering the critical area (Source: Dr C. Clibbon,).

Dycem – the most effective solution for floor level contamination

Below are images of floor level contamination before and after Dycem has been installed. 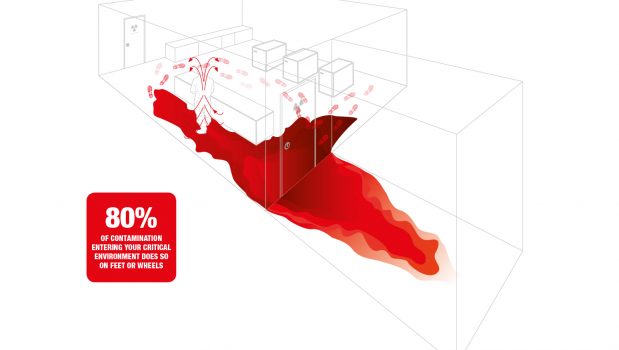 Threats to your business

Air, foot and wheel-borne contamination can pose a major threat to quality, product yield, operational effectiveness, profitability, and your reputation. It can often result in:

Quarantined batches
One microbe in a batch of aseptic drugs can threaten the whole batch, leading to it being quarantined, scrapped, or even requiring a full company shutdown.

Rejected goods
Your Company’s reputation will be damaged, perhaps irreparably, if you have to recall a contaminated product.

Product yield impact
Contamination, and consequent reworking, will have a negative impact on product yields and overall profitability.

Is your business at risk?

A staggering 80% of contamination entering your critical environment does so on feet or wheels (Source: 3M). Using a correctly sized and maintained piece of Dycem at all entrance ways can reduce this by up to 99.9%.

For a quick and easy way to find out if contamination is entering your critical space, place a sample of Dycem on the floor and walk over it, if the first step leaves an imprint, there are particulates from feet present. Take multiple steps until no more contamination is being visibly removed. This will give you a good indication as to the size of Dycem Contamination Control mat or flooring you need.

What can we do for you?